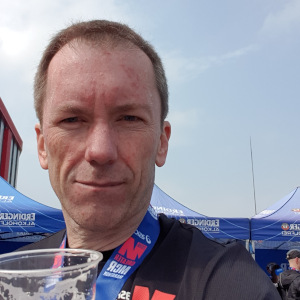 Some people think goals based on running a certain time are both arbitrary and unhelpful, but when you achieve them it feels different! There is a lot to be said for just trusting the process and letting the outcome be what it will be, but many of us strive for a running goal that is based on some notional time that we have decided will be the proof of our success. For many, younger, club marathon runners that may be to have a time under three hours, a time starting with a 2. For the rest of us it may be a much longer time, but still one that may seem just out of reach.

One of the most well known races in the UK is, of course, the London Marathon. As well as the charity places and the ballot, there is a special entry criteria called Good For Age. This requires the entrant to have finished another marathon in less than a specified time based on their age and then they qualify for a place. Over recent years these times have been adjusted as more people have been approaching the requisite grade. For the 2020 entry, the organisers have changed the process so there is are a fixed number of places and the required time is adjusted in each age category until the places are filled. They published some estimates of what these times may be and certainly the one for my age category was way out of reach.

With no chance of getting a Good For Age at London, I set my sights on 3 hours 30 minutes as a goal. I had managed 3:34:36 at Bournemouth in 2018, so this didn't seem out of the question. What I needed was a flat course, as Bournemouth had a couple of short sharp inclines as you moved from the seafront to the clifftops. Several options appeared, with Manchester seeming the best placed in both the country and my calendar. If running around Manchester doesn't sound the most thrilling experience of your life, I have to say that the enthusiasm of the various suburbs and outlying villages more than made up for anything lacking in scenery.

Training went well thanks to the help of the mBition online training plan. The weather was good - not what you might expect to hear. The transport... a bit of a problem. I had booked a hotel very close to the Trafford Centre thinking I could get a bus from there to the start. However, all the buses were being diverted onto the motorway straight into the city centre because, apparently, there was a marathon race in the way of the normal route! The hotel had theoretically arranged a shuttle bus, but it must have been stuck in traffic because there was no sign of it. So I ended up walking about 2.6km to the cricket ground before dropping my bag off and making my way to the start line. Apparently this was a good warm up as I crossed the line in 3:29:45.

Having cracked what felt like my final, achievable goal in marathon running, the desire to book another marathon this year wasn't there. Instead, the 50km race that passes my house looked like a more interesting challenge...