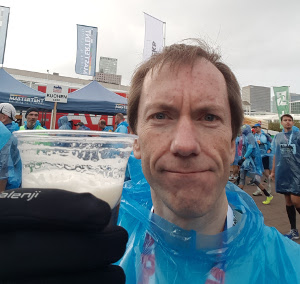 Frankfurt was my fourth marathon and one where I wanted to push that bit harder and eat away at my PB. I had run 3:56 at the Morpeth 2 Newcastle Marathon 2016 and a very steady 4:00 at Paris in the spring, so when my Mbition training plan suggested 3:39 I set my sights on that as a training target for the summer. Unfortunately, I managed to confuse the Mbition software and triggered a bug that led it to think I could run a 2:50 marathon instead! I had the choice to throw the plan away and create a new one or just carry on and make mental adjustments to the recommended training paces suggested. As I was already a few weeks in to training, I decided to carry on and I wonder now if that actually caused me to push that little bit harder to achieve my goal.

During training for Frankfurt I had managed to achieve PBs for parkrun, 10k and half-marathon distances, so the [self inflicted] pressure was definitely on to perform at Frankfurt. The journey out on Friday night was long; I'd booked the last BA flight from Heathrow and amazingly it made good time. However, the Frankfurt S-Bahn system was not having such a good time that night and I spent a good 45 minutes on the platform at the airport before a train appeared. Eventually I arrived at the hotel around 1am to catch some sleep before heading to the expo early to pick up my number.

Frankfurt's marathon expo is not as big as Paris, but certainly had a good mix of stalls selling clothing, tech or simply promoting other races across Germany and beyond. The number pick up was efficient, with the bib printed on the spot (no searching through piles of envelopes) and they cleverly put the goody bags at the other end of the hall, so you had to walk through the expo to get it!

Marathon morning itself was a bit windy, but not as strong as forecast and the drizzly rain dried up before we got going. The start pens were chaotic. The start is only on one carriageway, so not as wide as other big races I've done and the pens were not big enough to hold everyone. As I'd joined a prime number mathematics demo disguised as a loo queue (3 queue lines for 5 portaloos - how does that work?) I only got to my pen as the first wave was setting off. I, like many, had to wait outside the pen until the runners started to move forward. Once they did, we seemed to be able to enter the pen and join them without any issue, so not too stressful in the end. However, after the race I read reports that those in the first couple of pens were not ordered very well. I suspect one of the 2:59 pacers was too far forward, as many faster runners complained that they struggled to get past in the early stages and the round-about-three-hour runners complained about being elbowed by runners trying to get by. Hopefully they get it right in future years.

The first third of the race is spent going around loops of Mainhattan, the financial district of Frankfurt. It's skyscrapers are impressive, but not great for a reliable GPS signal. I'd set my finish time predictor to 42.5km to allow for dodgy GPS and not being able to follow the shortest path; I thought I may be being generous, but in hindsight it was nearly spot on and maybe I should have gone for 42.6km. If you look at my Garmin pace chart for the race, it shows my pace all over the place at the start and for the last 7km; it wasn't, as I felt I ran a fairly steady pace all the way around, but these were the bits with the tall buildings and twists and turns.

At Paris I'd enjoyed having halves of bananas at the aid stations, so I was pleased to see these were available from 15km onwards at Frankfurt. In Paris, the bananas were still in their skins and the ground was littered with them and quite slippy. This time, they were free of their skins and laid out on plastic sheets. I don't think that would have worked in the Paris heat but in late October it was fine and I gobbled up two or three bananas along the way. I have [half] joked that I'm only going to run marathons that offer bananas in future!

Halfway came and went and my pace was spot on time; I knew I would have to watch that it didn't drop in the second half, so was glad that there was more roadside musical encouragement along the second half. That said, I often seem to pass bands just as they finish a piece and are deciding which one to play next!

Frankfurt is not known for being the most interesting of cities, partially as my father-in-law reminded us because we flattened most of it in the war. However, the run never seemed to be anywhere particularly depressing - Brighton Marathon Weekend 2016 has the power station which is a pretty dire place to be at 35km, but I didn't recall anything like that. However, Frankfurt does run you right past the Messe at about the same distance, as if to say "look at what's waiting for you... in another 7km!" I'm glad I'd studied the map carefully before the race so I knew how much more there was to do. One final, but quite big, lap around Mainhattan and suddenly we were entering the Festhalle for the infamous finish line experience.

I knew I was close to my goal time and so I made a "sprint" for the line and was completely unaware of the cheerleaders lining the sides, but the red carpet and disco lights were unavoidable. I have to say the actual finish line was a bit of a let down. I crossed the rather thin white line and then seemed to come face to face with a bunch of photographers and a relay team trying to get a finish-line picture. There's not much space after the line, so you need to get out the way quick and the relay runners made this all the more pressing.

Once out of the Festhalle, the finishers area was a much more relaxed affair. Hot soup, water, cake and alcohol-free beer were all available once you'd received you medal. I think there were finishers t-shirts for sale in the expo area, but I have too many t-shirts so didn't investigate. However, as you can see, I did try the beer and had already been to the Kuchen stand!

I would certainly recommend Frankfurt. It provides a good flat course and generally good organisation apart from the start pens.