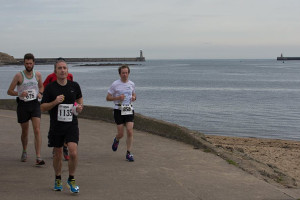 In 2015 I heard a piece about this race on the Marathon Talk podcast. The Morpeth was a race held on New Year's morning that had run from 1904 to 2004, but ceased when it was no longer practicable to close the A1 to traffic even on New Year's Day. The organisers planned to run a new course in July 2016 that would finish on Newcastle's town moor. Encouraged by the podcast and a great fan of Newcastle, I signed up for this as my first marathon. In the end it was my second, as Brighton Marathon Weekend 2016 came along and stole the first position.

For a time, I thought I'd be running two marathons within just a few months of each other. Fortunately for me the date of the Morpeth 2 Newcastle had to change. They couldn't get agreement on the route from all affected parties and so had to plan a new one. But this meant we would be ploughing through the middle of another event if it stayed in July. So, M2N was moved to 30 October 2016, more than a year after I'd entered. The new route ran south from Morpeth for a short way before heading across to the coast just at the southern end of Blyth. From here it ran all the way down to Tynemouth before following the Tyne in to a finish on Spiller's Quay at the eastern end of the Newcastle's quayside.

It wasn't clear how many people had entered the race and the organisers were being quite guarded about numbers, but looking at the results it seems about 340 of us set off from Morpeth that morning. A bit different than the 11000 who ran in Brighton! In the early stages there were lots of us running together, but once we hit the coastline things started to spread out and in the second half there were periods where I could see maybe one or two runners some distance ahead. There were marshalls at all the major road junctions, or at least there were meant to be. I think they were supplied by an event contractor and probably more used to marshalling music festivals, as at some of the junctions they'd clearly got bored and wandered off for a bit. Others were just staring at their phones and one was sat in his car and just stuck his hand out the window to stop the traffic when runners came by!  Fortunately the drinks stations were manned by volunteers who gave lots of encouragement as well as the welcome drinks - it was surprisingly warm for the end of October in the north east of England.

The final few miles were along the Hadrian's Wall path, which was an improvement from some of the industrial estates we'd passed through to get there, but it did seem eerily quiet in places. I was so glad to see the last refreshment point at Pottery Bank and remember telling them as much. One last cup of High5 energy drink and I was off again for the final leg to finish in 3:56:32. I believe there was quite a party at the Tyne Bar, but I was a bit out of it, so we staggered back to Newcastle for some rest before, to my wife's suprise, I suggested Nando's for dinner.